TURKMENISTAN: "The right to acquire and use religious literature .. of their choice"?

The MSS secret police raided homes in at least four towns in Lebap Region on 21 July, the first day of the Muslim festival of Id al-Adha. Officers seized religious books, telling Muslims they can have only the Koran at home. "When they find any religious book, even if it conforms with Turkmenistan's religious literature standards, MSS officers begin to question individuals," one resident told Radio Free Europe. A Lebap Region police officer insisted to Forum 18 that the MSS secret police conducted the raids, not the ordinary police. Russian Orthodox attempts to register six new parishes have seen no progress.

Ministry of State Security (MSS) secret police officers raided homes in at least four towns in the eastern Lebap Region and seized religious literature, Radio Free Europe's Turkmen Service stated. Officers told Muslims they could have no religious books at home apart from the Koran. The raids came on 21 July, the first day of the Muslim festival of Kurban Bayram (Id al-Adha). 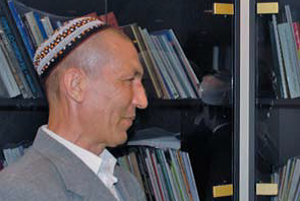 Nasrullah ibn Ibadullah, Ashgabat, August 2007, shortly after his release from prison
US Commission on International Religious Freedom
MSS officers are known to have raided homes in the towns of Danew, Darganata, Seydi and Gazojak, Radio Free Europe noted (see below).

The MSS secret police conducted the raids, not the ordinary police, the man who answered the phone of the head of the 6th Department of Lebap Region Police insisted to Forum 18. He refused to discuss anything else, such as why homes in various parts of Lebap Region were raided to hunt for religious literature (see below).

The MSS' actions contradict regime claims. "Turkmen citizens, foreign nationals and stateless persons have the right to acquire and use religious literature and other information materials with religious content in any language of their choice," the regime claimed in a 27 March 2020 report to the UN Human Rights Committee (see below).

Police have turned away Muslims who came to pray at the main mosque in the south-eastern city of Mary on the night of Miraj. Radio Free Europe noted that many Muslims then tried to pray outside in the courtyard of the mosque, but were prevented from doing so without any explanation being given. Some Muslims questioned why mosques and other places of worship were closed when commemorations of President Gurbanguly Berdymukhamedov's late father took place with thousands of people present (see below).

No official in the regime's Commission for Work with Religious Organisations and Expert Analysis of Resources Containing Religious Information, Published and Printed Production – including chief specialist Nasrullah ibn Ibadullah - answered the phone at any time Forum 18 called it on 3 August in Ashgabat. The Cabinet of Ministers official who chairs the Commission, Yusupgeldi Durdiyev, also did not answer his phone that same day.

The office of the regime-appointed Human Rights Ombudsperson Yazdursun Gurbannazarova did not answer the phone each time Forum 18 called the same day. She was appointed in 2017, and her office does not comply with the United Nations' Paris Principles for national human rights institutions.

Tight state controls on freedom of religion or belief

There has been no progress since 2015 in the Moscow Patriarchate Russian Orthodox Church's attempts to apply for state registration for six new parishes (see below). 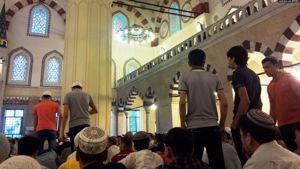 The MSS secret police conducted the raids, not the ordinary police, the man who answered the phone of the head of the 6th Department of Lebap Region Police insisted to Forum 18 from Turkmenabat on 3 August. He refused to identify himself or discuss anything else, such as why homes in various parts of Lebap Region were raided to hunt for religious literature. The officer then put the phone down.

The 6th Department ostensibly combats organised crime, but also covers tasks such as restricting freedom of religion and belief.

Officers seized religious literature which they claimed individuals should not have at home. The MSS also demanded that Muslims who regularly go to the mosque should stop reading any religious books apart from the Koran.

There is a de facto ban on most religious publications, and the regime routinely confiscates religious literature from residents and from people entering or leaving Turkmenistan. Very little literature is produced, making it almost impossible for anyone to acquire copies of the Koran, Bible or other religious works in any language.

The MSS' actions contradict regime claims. "Turkmen citizens, foreign nationals and stateless persons have the right to acquire and use religious literature and other information materials with religious content in any language of their choice," the regime claimed in a 27 March 2020 report to the UN Human Rights Committee (CCPR/C/TKM/3).

One resident of Lebap Region told Radio Free Europe that officials had raided dozens of homes in their District alone. The MSS secret police's main concern was whether residents of the raided homes had religious literature.

The resident added that once news of the raids had spread, residents of other Districts tried to hide any religious books they had.

Older residents said the raids reminded them of the persecution of people exercising freedom of religion or belief in Soviet times. "In the times of the USSR they also raided believers' homes," one elderly resident told Radio Free Europe. "And now, as soon as there's a report of a radical person, the authorities start to suspect the three million-strong population."

"When they find any religious book, even if it conforms with Turkmenistan's religious literature standards, MSS officers begin to question individuals," the resident told Radio Free Europe. "They even go as far as to force believers to drink vodka, crudely violating their rights."

The elderly resident added that many people have a poor understanding of Islam, which they thought was dangerous as it might make it easier for them to begin to follow radical religious movements from outside. The resident thought that MSS secret police pressure on Muslims made the situation worse.

In January, Police in Lebap Region's Farap District detained men on the streets who had beards. Officers took the men to the police station, suspecting them of being "religious extremists" or "Wahhabis". Officers "wanted to know if I followed religious traditions or not, and if I drink alcohol or not. They questioned me for about two hours," one recounted. Officers shaved off beards and forced the men to drink vodka.

Also in Farap in January, police raided a home where about 10 people had gathered to pray the namaz (Muslim daily prayers). They took those present to the police station and held them in the investigation prison. 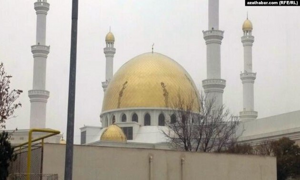 Mary Mosque
Azathabar.com (RFE/RL)
The regime is most interested in controlling the Islamic community, as it has the largest number of followers.

In the evening of 9 March, police turned away Muslims who came to pray at the main mosque in the south-eastern city of Mary on the night of Miraj. This commemorates the night-time journey of the Muslim prophet Muhammad to Jerusalem. Radio Free Europe noted that many people – old and young, men and women, most wearing facemasks – had gathered in the courtyard of the mosque. Police and plain clothes officials evicted them without listening to pleas to be allowed to remain.

Muslims who came to pray at the main mosque in Mary on the morning of the festival of Id al-Fitr (Oraza Bayram) on 13 May found the mosque closed, Radio Free Europe noted the same day.

Worshippers had come to pray at the mosque because other local mosques had been closed because of the coronavirus pandemic. However, the regime does not admit that it has had any Covid-19 cases.

Many Muslims then tried to pray outside in the courtyard of the mosque but were prevented from doing so without any explanation being given. "We were chased away with just one word, 'No,'," one local Muslim told Radio Free Europe. "They didn't respect us."

Only later that day did one pro-regime website Turkmen Portal carry an announcement from the state-controlled Muftiate that Id al-Adha prayers would take place in mosques without worshippers being present. No announcement was made on state-run media before the festival.

"Had the government given the news on TV in advance, we would not have travelled the several kilometres, would not have come to the mosque and been evicted," one local Muslim told Radio Free Europe.

Residents of Ashgabat stated that while cafes, restaurants and parks were open, mosques were closed at Id al-Fitr. One resident regarded this as disrespectful. "People have only religion left and they want to take it away from them," the Ashgabat resident told Radio Free Europe.

Other Muslims questioned why mosques and other places of worship were closed when commemorations of President Gurbanguly Berdymukhamedov's late father took place with thousands of people present. Other official events have also taken place without masks or social distancing.

Officials closed all places of worship of communities they allow to exist on 13 July 2020. The restrictions were lifted only on 1 April 2021, though with instructions for all worshippers to wear facemasks and maintain social distancing because of the continuing pandemic.

"Services continue for the moment, with due attention to the hygiene requirements, including masks and social distancing," the leader of a religious community told Forum 18 on 4 August.

No permission for more Orthodox parishes to exist 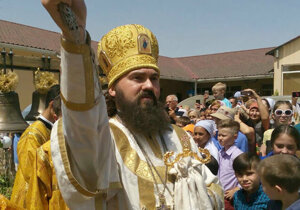 Russian Orthodox Archbishop Feofilakt on parish visit
Turkmen.news
The regime arbitrarily denies state registration and so permission to exist to any religious community it dislikes. The only mosques allowed to exist are those controlled by the state-controlled Muslim Spiritual Administration (the Muftiate), led by Chief Mufti Yalkab Hojagulyyev.

In March 2015, the Moscow Patriarchate Russian Orthodox Church's Central Asian Synod, meeting in Uzbekistan's capital Tashkent, announced that six new parishes in Turkmenistan were being formed and would apply for state registration.

Twelve parishes already had state registration, and the six new parishes were planned for Kerki (then known as Atamurat), Serhetabad, Serdar, Hazar, Garabogaz and Magtymguly, the Uzbek Russian Orthodox website noted in 2015.

However, officials told the Orthodox verbally that any registration would not be given, someone familiar with the process told Forum 18 in early August 2021.

The 12 registered Russian Orthodox parishes in Turkmenistan come under their own separate Deanery, and the regime has blocked a Diocese being set up in the country. Contact with the parishes from outside the country has been difficult. The Deanery is directly under the Patriarch of Moscow, and has been administered on a "temporary" basis since 2008 by Archbishop Feofilakt (Kuryanov) of Pyatigorsk.

All 16 known jailed conscientious objectors were freed under amnesty on 8 May. The 16 – all Jehovah's Witnesses – were serving terms of one to four years. However, no Muslims jailed for exercising freedom of religion or belief are known to have been amnestied. Nor has the regime given any indication that it will heed repeated UN calls to introduce a civilian alternative to compulsory military service, though Jehovah's Witnesses say no new criminal cases against conscientious objectors have been handed to prosecutors. Forum 18 was unable to reach any officials.

On 16 March the regime jailed another conscientious objector to military service for two years, the eighth such 2021 jailing. Like six of the other 2021 jailings, 21-year-old Jehovah's Witness Rasul Rozbayev is being punished for the second time on the same charges. The jailings ignore a December 2020 appeal by four UN special procedures. A March 2020 regime report to the UN insisted that defending the country "is the sacred duty of every citizen". 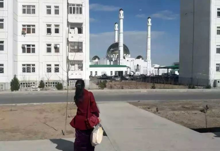 Police detained about ten Muslim men in Farap in January who they believed were following their faith too closely, such as by praying every day. Officers "used swear words and behaved crudely towards those they detained." Police forcibly shaved one man, made him drink alcohol, and fined him with no explanation. About ten more were held for praying in a home. Officials warned school children not to take part in (unspecified) "illegal" religious groups and residents received a similar warning.