Kordai District Court fined two more ethnic Dungan Muslims seven weeks' average wages each for teaching the Koran to children. The court issued eight such fines between 2018 and 2020, all to Dungan Muslims. More than half the administrative fines for teaching religion to children in Kazakhstan are in Kordai District. Police chief Maksat Erezhepov insists these prosecutions were "in line with the law". "Any actions that contradict the law will face severe measures." Both he and the regional religious affairs official deny any "ethnic factor" in the prosecutions.

Despite having less than one percent of Kazakhstan's population, Kordai District of Zhambyl Region, along the southern border with Kyrgyzstan, has seen more than half the prosecutions for "illegal" religious teaching in the whole of Kazakhstan between 2018 and 2021. Two Muslims who taught the Koran to children in their village have been fined so far in 2021, the first on 19 January, the second on 15 March. Both are members of Kordai District's Dungan ethnic minority. 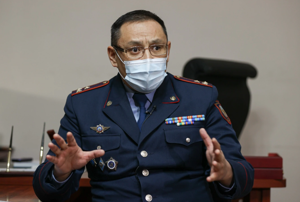 In addition to the two Muslims fined in Kordai District in 2021 for teaching religion to children, courts fined a further 18 individuals in the first three months of 2021 to punish them for distributing religious literature, texts, videos, audio and religious items in places and ways the regime declares to be illegal under its compulsory religious censorship.

Kayrulla Kushkaliyev, the head of Atyrau regional Religious Affairs Department – which brought six of the prosecutions for posting religious materials online – insisted that he was merely fulfilling the requirements of the Religion Law. "People don't have the right to distribute religious materials in any form whatsoever, whether text, video or audio," he told Forum 18.

The two religious education prosecutions so far in 2021 bring to ten the number of known prosecutions of ethnic Dungan Muslims from Kordai District for leading such Koran classes for children since August 2018. The two fined in 2021 are both from the village of Sortobe. The earlier seven Muslims (one of them punished twice) are from the village of Masanchi. All were identified by police conducting "preventative measures", according to the court decisions seen by Forum 18 (see full list below).

Kordai District has a population of about 150,000, of whom about a third are Dungans. The District was the site of ethnic clashes between Kazakhs and Dungans in February 2020, which left 11 people dead and hundreds injured.

"Dungans are Sunni Muslims of the Hanafi school," a Dungan from neighbouring Kyrgyzstan, who is familiar with the situation in Kordai District, told Forum 18 on 15 April. "All mosques are open to both Kazakhs and Dungans. The only restriction is that the Muslim Board allows sermons only in Kazakh and not in Dungan." 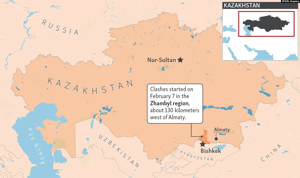 Kordai District, Zhambyl Region, location of ethnic clashes, February 2020
RFE/RL
The state has allowed only one Muslim community in the entire country to register: the state-controlled Muslim Board. All mosques must be subject to it to be allowed to exist. Independent mosques and mosques catering mainly to one ethnic group are banned.

In defiance of its international human rights obligations, Kazakhstan bans individuals from teaching their faith to children unless they have state approval.

Maksat Erezhepov, head of Kordai District Police, insisted that these prosecutions for teaching the Koran to children were "all in line with the law". "What these people did was against the law," he told Forum 18. "Any actions that contradict the law will face severe measures."

When Forum 18 pointed out that all ten of those prosecutions since 2018 for teaching the Koran to children were of Dungans, Erezhepov denied that their ethnicity was relevant. "There is no ethnic factor" (see below).

Zhangeldi Omarov, head of Zhambyl Region Religious Affairs Department, initially denied that anyone is punished for teaching the Koran to children. Told by Forum 18 of the cases, including the two fines in 2021, he refused to discuss the court decisions. He then insisted that religious teaching is allowed only "in appropriate places – strictly-controlled locations" (see below).

On 15 December 2020, police raided a house in the Kordai District village of Sortobe while 23-year-old Sherba Yuburov was teaching religion to children without permission from anyone.

A case against Yuburov was brought under Administrative Code Article 490, Part 3. This punishes: "Carrying out missionary activity without state registration (or re-registration), as well as the use by missionaries of religious literature, information materials with religious content or religious items without a positive assessment from a religious studies expert analysis, and spreading the teachings of a religious group which is not registered in Kazakhstan". The punishment is a fine of 100 MFIs, with deportation if the individual is a foreign citizen.

"In the court hearing, law-breaker Sherba Yuburov admitted fully his guilt that he committed a violation of the law," the subsequent court decision notes, "and explained that he was teaching the Koran to children of various ages without any permission at all. He regretted what he had done."

On 19 January 2021, Judge Ermek Orazkulov at Kordai District Court found Yuburov guilty and fined him 100 MFIs, about seven weeks' average local wage for those in formal work. Yuburov did not appeal against the decision.

A chancellery official at Kordai District Court told Forum 18 on 15 April it could not speak to Judge Orazkulov. The official refused to discuss the cases of Muslims punished for teaching the Koran and put the phone down.

On 24 February 2021, police raided Kharsan Yasyrov's house also in the village of Sortobe while the 43-year-old was teaching religion to children. Officers drew up a record of an offence against him the same day. It accused Yasyrov of having conducted "missionary activity" by teaching the Koran since September 2020 without permission from anyone.

A case was brought against Yasyrov under Administrative Code Article 490, Part 3. The subsequent court decision uses similar wording as in Yuburov's decision, noting that Yasyrov too admitted his guilt and expressed remorse.

On 15 March 2021, Judge Orazkulov at Kordai District Court found Yasyrov guilty and fined him 100 MFIs. Yasyrov did not appeal against the decision.

"All in line with the law" 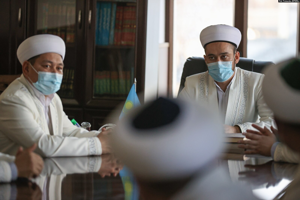 Muslim Board Imams, Sortobe, 2 February 2021
Pyotr Trotsenko (RFE/RL)
Maksat Erezhepov, head of Kordai District Police, insisted that these prosecutions for teaching the Koran to children were "all in line with the law". "What these people did was against the law," he told Forum 18 from Kordai on 15 April. "Any actions that contradict the law will face severe measures."

Asked why individuals cannot give religious lessons to children provided the parents consent, Erezhepov responded: "They must register, and only then can they do so. Other mosques observe this."

Asked why his officers conduct "preventative inspections", Erezhepov replied: "We conduct inspections all over the District." Asked what such "inspections" were supposed to prevent, he refused to say.

When Forum 18 pointed out that all ten of those prosecutions since 2018 for teaching the Koran to children are of Dungans, Erezhepov denied that their ethnicity is relevant. "There is no ethnic factor," he insisted. "All are citizens of Kazakhstan."

Told that his District, with less than one percent of Kazakhstan's population, prosecutes more individuals for teaching religion to children than the whole of the rest of Kazakhstan, Erezhepov said he did not believe it. He then put the phone down.

Zhangeldi Omarov, head of Zhambyl Region Religious Affairs Department, initially denied that anyone is punished for teaching the Koran to children. However, told of the cases Forum 18 was investigating in Kordai District he then insisted that such teaching is allowed only "in appropriate places – strictly-controlled locations".

Asked why individuals should be punished for giving religious lessons to children with parental consent, Omarov told Forum 18 from Taraz on 15 April: "We don't discuss court cases – that is a matter for the courts."

Asked why all nine of those punished since 2018 (one twice) for such religious education are ethnic Dungans, Omarov replied: "Who's a Dungan, who's a Kazakh, who's a Russian – they're all citizens. There's one law for all." Asked why more than half of prosecutions since 2018 in the whole of Kazakhstan for those teaching religion have occurred in one District of Zhambyl Region, Omarov asked where Forum 18 received its information. Told that Forum 18 had reviewed many court decisions, he did not respond. 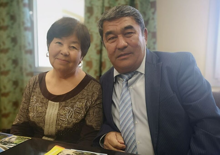 KAZAKHSTAN: "People don't have the right to distribute religious materials in any form whatsoever"

In 134 known administrative prosecutions in 2020, 114 individuals (one twice), three charities and one company were punished for worship meetings, offering religious literature and items (including online), sharing or teaching faith, posting religious material online, or praying in mosques. At least 14 fines were imposed in January 2021. Deputy Chair Anuar Khatiyev of the regime's Religious Affairs Committee refused to discuss why individuals should face prosecution and punishment for exercising their right to freedom of religion or belief.

Despite serious heart problems, 42-year-old Muslim prisoner of conscience Zhuldyzbek Taurbekov was not on 26 November freed early. North Kazakhstan Regional Court rejected his appeal against an earlier denial, even though "his illness is on the list of illnesses for which prisoners should be freed" his lawyer told Forum 18. There are 17 known prisoners of conscience jailed for exercising freedom of religion or belief, all Muslim men.