Prisoners killed as officers and special forces suppressed a riot in high-security Labour Camp 3/3 in Khujand [Khojand] in the northern Sugd Region in the night of 7 to 8 November were not allowed to be buried according to Muslim rites. Bodies were returned in sealed packages, which relatives were not allowed to open. In at least some cases, police officers insisted on burying the dead prisoners themselves. They did not allow washing of the bodies or any Islamic prayers. 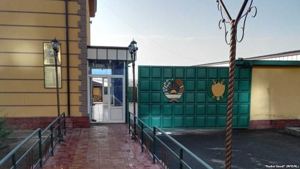 High-security Labour Camp YaS 3/3, Khujand
Radioi Ozodi (RFE/RL)
Interior Ministry, Prison and state religious affairs officials in Khujand and in the capital Dushanbe either denied that the killed prisoners had been denied religious burials, refused to discuss the issue or were unreachable (see below).

Around 50 people are thought to have been killed in the prison, almost all of them prisoners, when officers and special forces suppressed the riot, Radio Free Europe (RFE)'s Tajik Service reported on 12 November.

"The order came from above"

Rukiyya Ismoilova, the mother of one of the killed prisoners, 23 year-old Bakhrom Ismoilov, told RFE that the family was not allowed to open the coffin, which was "brought to the cemetery [in Khujand] in an ambulance accompanied by several police officers and a grave digger. A piece of paper was glued on the coffin, which had his [Ismoilov's] first and last names written on it."

Ismoilova asked police to "allow me to say goodbye to my son but they refused". Officers told her that "the order came from above" without specifying who issued the order. The police "themselves put the body in the grave and did not allow us to come close". Ismoilova stated that Islamic ritual washing of the body and prayers did not take place. Police claimed that the ritual had already been carried out in prison.

Many bodies of the dead inmates were brought to their relatives in sealed packages, according to a human rights defender. "Relatives were not allowed to open the packages, only to bury them without any Muslim ceremonies," the human rights defender who wished to remain unnamed for fear of state reprisals told Forum 18 on 14 December.

The human rights defender speculated that the authorities did not want relatives to see the state of the prisoners' bodies and see how they might have died.

Fayzullojon Safarov, Head of Khujand prison, was dismissed, and a criminal case against him was opened, Akhbor.com reported on 15 November. Then on 23 November, President Emomali Rahmon ordered the dismissal of the former Head of the Interior Ministry's Chief Directorate of Enforcement of Criminal Punishments, Izzatullo Sharifov "in connection with his retirement", Tajik media reported.

On 29 October 2012 the United Nations (UN) Human Rights Committee found in a Belarusian case that "refusal to hand over the body for burial in accordance with the religious beliefs and practices of the executed prisoner's family have the effect of intimidating or punishing the family by intentionally leaving it in a state of uncertainty and mental distress".

The Committee ruled that this amounted to inhuman treatment in violation of the International Covenant on Civil and Political Rights (ICCPR) (Article 7 – Freedom from torture and cruel, inhuman or degrading treatment or punishment), but did not examine a claim that the ICCPR's Article 18 on freedom of religion or belief had also been violated (Communication No. 2120/2011).

The UN Standard Minimum Rules for the Treatment of Prisoners (known as the Mandela Rules - A/C.3/70/L.3) require governments to respect the freedom of religion and belief and other human rights of prisoners.

Tajikistan is a participating State of the Organisation for Security and Co-operation in Europe, whose Guidance Document on the Nelson Mandela Rules based on international law states: "There may be additional cultural, religious and/or gender-related requirements regarding the treatment of the body of a deceased prisoner", and the need to respect family arrangements (page 73).

"Whoever says that is lying!"

Colonel Ilkhomjon Makhmudzoda, Deputy Head of the Chief Directorate of Enforcement of Criminal Punishments, would not say why Muslim burial rites were banned for the prisoners who were killed. "I was not there, so I cannot say exactly what happened," he claimed to Forum 18 from Dushanbe on 18 December. When Forum 18 asked who from his Directorate could explain why this happened, he then claimed to be busy and rang off.

The Chief Directorate refused to put Forum 18 through to the Khujand Prison administration on 19 December. The phone of Dilovar Khushmatov, interim Head of the Prison, was turned off each time Forum 18 tried to reach him on 19 December.

Lieutenant Colonel Anvar Rakhmonov, Deputy Head of Sugd Police, claimed that statements that families were not allowed to bury their dead according to Muslim rites were untrue. "Whoever says that is lying!" he told Forum 18 from Khujand on 18 December. When Forum 18 pointed to credible witness claims that Muslim funeral rites were not allowed, he refused to discuss the issue further.

Sukhrob Rustamzoda, who is responsible for religious affairs in Sugd Regional Administration, also refused to discuss the issue. Asked on 18 December why families of the killed prisoners were not allowed to bury their dead according to Muslim rites, he claimed to Forum 18: "I am very busy. I cannot talk to you." He then told Forum 18 to talk to the State Committee for Religious Affairs and Regulation of Traditions, Ceremonies and Rituals (SCRA) in the capital Dushanbe.

The telephone of SCRA Chair Sulaymon Davlatzoda was answered by Mirzoyev, who refused to give his first name. He refused to discuss the ban on burying the killed prisoners under Muslim rites. "I am not competent to answer you," he claimed to Forum 18 on 18 December. He also refused to put Forum 18 through to anyone who could discuss the issue. (END)