Rebel authorities of the self-declared Donetsk People's Republic, an unrecognised entity in eastern Ukraine, have continued in 2018 to confiscate or seal places of worship to prevent religious communities from meeting. A Baptist Church in the southern seaside town of Novoazovsk, confiscated and sealed against entry in September, is the latest known confiscation. Also seized in 2018 were a mosque in Donetsk and a Baptist Church in Makeyevka. 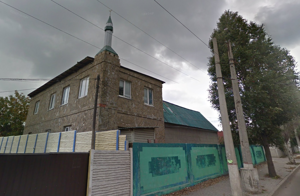 Between 2014 and the end of 2017, the rebel authorities are known to have confiscated or sealed against entry other places of worship, including Jehovah's Witness Kingdom Halls, Mormon churches, a Muslim prayer room, a Seventh-day Adventist church and a Protestant-run University (see below).

Members of religious communities of a variety of faiths told Forum 18 that they fear that meeting for worship in private homes could lead to raids and possible punishment.

Sergei Gavrish, the head of the Religion and Nationalities Department at the Culture Ministry in Donetsk, refused to discuss why the authorities have seized numerous places of worship. "Our Ministry has no involvement in this," he told Forum 18 on 11 October. "I don't know who does this."

The State Property Fund often seizes the places of worship on the pretext that they are unused and without an owner. Religious communities contest these claims. Officials of the Property Fund refused to discuss the seizures with Forum 18 (see below).

Donetsk's Al-Amal Mosque was closed on the pretext that it was spreading "extremist" literature. The State Security Ministry (SSM) in Donetsk refused to discuss the seizure with Forum 18, or whether any criminal cases are underway against two mosque members (see below).

As well as the accusation of "extremism", the General Prosecutor's Office accused Jehovah's Witnesses of not having local registration. However, Culture Ministry and Justice Ministry officials told Forum 18 that no religious communities currently have registration. An amendment to the Religion Law gives religious communities until 1 March 2019 to lodge registration applications (see F18News 2 November 2018 http://www.forum18.org/archive.php?article_id=2428).

In September 2018, officials in the southern seaside town of Novoazovsk seized and sealed the Baptist Church. "Members of this church are deprived of the opportunity to conduct worship meetings," fellow-Baptists lamented to Forum 18.

Oleg Sidorenko, first deputy head of Novoazovsk District Administration, said he did not know about the seizure of the Baptist Church and said he would find out. Asked why places of worship are being seized, including in Novoazovsk, Makeyevka, Donetsk and Gorlovka, he responded: "And in Kyiv and Lviv." He then put the phone down.

On 6 July, officials seized the two-storey building of New Life Baptist Church in Makeyevka. "About midday, seven officials – including some with weapons – arrived and told us that our building no longer belongs to us," Pastor Aleksandr Moseychuk recounted on his Facebook page the same day. "Despite all our persuasion and discussions, they sealed the building."

The seal on the door was signed by a Justice Ministry official A. S. Bashkatov, according to a picture seen by Forum 18.

Asked by Forum 18 about the church seizure on 11 October, the official who answered the phone at Makeyevka Justice Department immediately put the phone down.

Pastor Moseychuk noted that each Sunday "people heard the living word of God, many of them repented of their sins and we have people preparing for baptism." He added that the church had also provided food and clothing for local people in need in the four years since fighting began.

"The church building has not been returned to its owner," fellow-Baptists lamented to Forum 18 on 9 October. "What's worse, the building has been placed on the list of ownerless property."

After the July seizure of their place of worship, church members in Makeyevka met in other churches' property. "However, churches renting their premises then began to suffer persecution," Baptists told Forum 18. Church members can now meet only in small groups in homes.

On 21 June 2018, one week after the end of the Muslim holy month of Ramadan, SSM officers arrived at Al-Amal Mosque in Donetsk's Kalinin District, the Ministry noted on its website on 27 June. They searched the building, seizing prayer books and other literature. They also seized copies of the Ukrainian-language "Umma" newspaper.

Officers then sealed the building, Said Ismagilov, Mufti of the Spiritual Directorate of Muslims of Ukraine UMMA, told Forum 18 from Kyiv on 10 October. He said the building belongs to a private owner who sponsored its construction.

Ismagilov, the Donetsk-born former Imam of the Al-Amal Mosque, fled from the rebel-held area in September 2014 fearing arrest. Both in his time and since, men in camouflage were often present during the namaz prayers and inspected books present in the mosque, he noted.

Following the June 2018 raid, officers took the current Imam, Rinat Khabibbudinov, and a congregation member from nearby Makeyevka for questioning. A criminal investigation appears to have been launched against the two men for spreading "extremist" literature, Ismagilov added. The two had to sign pledges that they would not leave the city.

The SSM, describing the mosque community as a "pseudo-religious organisation of Islamic orientation", claimed it was linked to the Muslim Brotherhood and was distributing "extremist" literature.

Among the books officers seized the Ministry identified two: "Fortress of a Muslim", a collection of Muslim prayers which, as it noted, is banned in Russia; and "The Last Journey", a book published by the Ukrainian Muslim organisation Al-Raid and which has also been declared "extremist" in Russia.

The duty officer at the SSM in Donetsk refused to put Forum 18 through to anyone who would explain why officers forcibly closed the mosque in June, or whether criminal cases against mosque members are underway. "No one will give you the phone number of anyone here," he told Forum 18 on 12 October, "as we don't give such information by phone." He then put the phone down.

Another small Muslim prayer room in rented first floor premises elsewhere in the city had been closed in 2015 or 2016, also on alleged grounds of "extremism", Ismagilov added.

One other mosque still functions in Donetsk, the large Akhat Jami Mosque in the city's Oktyabrski District, which is affiliated to another Islamic group, the Spiritual Centre of Muslims of Ukraine.

The Donetsk rebel authorities seized various places of worship and religious institutions after they took control locally in 2014. One Pentecostal Church was among those seized, but was later returned to the community, a Pentecostal told Forum 18.

In July 2014, rebels seized Donetsk Christian University, a Protestant theological college with its own campus. They threatened those in the college with a summary field court if they failed to leave. Confiscations of places of worship continued in the following year. It was at about this time that a Muslim prayer room in Donetsk was forcibly closed (see above).

Rebels seized four churches in different city districts of Donetsk belonging to the Church of Jesus Christ of Latter-day Saints (commonly known as Mormons). Without consulting the owners, the rebels used the churches for other purposes, one as a "children's creative centre" (which opened in April 2015), and the other three as wedding palaces (which opened in May 2016, September 2017 and July 2018), the Kyiv-based Institute for Religious Freedom noted.

On 16 November 2016, armed men came to the Seventh-day Adventist Church in Gorlovka. They told those present that the town administration had declared the two-storey building its property and that the church must vacate it immediately, the Church noted at the time. The men seized all the building contents as well, including equipment and the library, except for the pastor's personal possessions.

Officials – who had given no prior notice of the seizure – said the Church was unable to document its ownership of the building. Church members dispute this and say they provided the town administration with all necessary documentation.

The Adventist church was then turned into a funeral parlour, which opened on 12 December 2016, according to the local media. A large display with the text of the Ten Commandments on the back wall of the sanctuary had been covered or painted over.

"The Church was a beautiful building, and we received no compensation for it," an Adventist familiar with the situation told Forum 18 from the Ukrainian capital Kyiv on 11 October 2018.

Forum 18 was unable on 11 and 12 October to reach Ivan Prikhodko, the head of Gorlovka administration since July 2016. Another administration official – who did not give his name – refused to give Forum 18 any information the same day. "We only talk to media which have accreditation."

From that month, the authorities began seizing Jehovah's Witness Kingdom Halls, handing them to local administrations. Titles to the properties had often already been seized in anti-"extremism" raids on the Kingdom Halls earlier in 2017. Officials seized Kingdom Halls in Gorlovka, Donetsk, Telmanove, Yenakievo, Uglegorsk and Debaltsevo.

The Gorlovka Kingdom Hall seizure was typical. In an 8 September 2017 order, seen by Forum 18, the head of the State Property Fund Sergei Kaida declared that the building was abandoned and would be taken over by the Town Administration. Ten days later a State Property Fund Commission, accompanied by Town Administration officials, visited the building and confirmed the decision.

On 27 September 2017, the Gorlovka Jehovah's Witness community appealed to the Interior Ministry in Donetsk for their Kingdom Hall. In his 3 November 2017 reply, seen by Forum 18, deputy minister Major-General Igor Melnikov outlined the confiscation on the grounds that the building was allegedly unused.

In a 21 November 2017 response to the community seen by Forum 18, Kaida of the State Property Fund told the community leader that the Kingdom Hall was being seized for one year "as it had the signs of being without an owner". It claimed the State Property Fund's decision had been taken "in strict conformity" with laws governing ownerless property.

Olga Pushnova, a State Property Fund official who had prepared Kaida's November 2017 response to Gorlovka's Jehovah's Witness community, refused to discuss why its property had been seized. "I'm not working on that property," she told Forum 18 from Donetsk on 12 October. She then put the phone down.

The Debaltsevo Kingdom Hall seizure was similar. On 25 October 2017, the State Property Fund declared that the building was abandoned and should be managed by the town administration, Jehovah's Witnesses told Forum 18. On 22 November 2017, the police welded shut the entrance door. (END)

Reports on freedom of thought, conscience and belief in Donbas can be found at http://www.forum18.org/Archive.php?query=&religion=all&country=87.