On 5 February 2018 Tajikistan's State Committee for Religious Affairs and Regulation of Traditions, Ceremonies and Rituals (SCRA) claimed that 1,938 mosques were in 2017 forcibly closed and converted to secular uses. However, human rights defender Faizinisso Vokhidova noted that the SCRA's claims that the mosques were illegal is not credible. She also noted that many closed mosques had refused to complain about their closure, even when offered legal assistance in bringing court cases. "They were afraid to do so", Vokhidova told Forum 18 (see below). 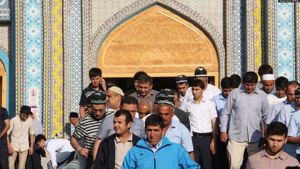 Dushanbe Mosque
Radioi Ozodi (RFE/RL)
Press conferences were in early January held in various parts of Tajikistan to announce local mosque closures and the alleged reasons for this. Two typical examples were in the northern Sugd Region, in Isfara and in Bobojon-Gofurov District. In both cases, officials claimed the mosques were closed at the request of local residents. In neither case were officials able to explain to Forum 18 why they only allow mosques with a capacity far below the possible numbers of worshippers (see below).

The authorities are highly dismissive of questions about the mosque closures. When Forum 18 on 19 February asked the SCRA official responsible for work with mosques why so many have been closed, he put the phone down and then put on a recorded message with a female voice repeatedly saying: "Who are you, where are you calling, what an idiot". His phone continued to play this message with a male voice the following day (see below).

Imprisoned Jehovah's Witness prisoner of conscience Daniil Islamov is preparing to appeal for the last time to the Supreme Court against his six-month jail term imposed in October 2017 for refusing compulsory military service (see F18News 27 February 2017 http://www.forum18.org/archive.php?article_id=2357). On 28 November the Supreme Court ruled that his case should be sent back to the first instance Court for "correction of mistakes in the decision". On 5 October the United Nations (UN) Working Group on Arbitrary Detention publicly stated that Tajikistan should release prisoner of conscience Islamov "immediately" (see F18News 5 December 2017 http://www.forum18.org/archive.php?article_id=2337). This has not happened.

All exercise of the freedom of religion and belief is under tight state control and surveillance, with Muslims being particularly targeted for restrictions. There are, for example, severe limitations on the numbers of mosques permitted and activities allowed inside those mosques. These limitations are backed by repeated mosque and Islamic prayer room closures (see Forum 18's Tajikistan religious freedom survey http://www.forum18.org/archive.php?article_id=2138). The state continues to forcibly close Mosques and Muslim prayer rooms as well as impose increased surveillance and controls on the mosques they do permit (see eg. F18News 6 May 2016 http://www.forum18.org/archive.php?article_id=2175). Officials also repeatedly attempt to stop Muslim man wearing beards and Muslim women wearing the hijab (headscarf) (see eg. F18News 2 August 2017 http://www.forum18.org/archive.php?article_id=2301).

At least nine Muslim men – including an imam and a well-known heart surgeon - are known to have been jailed as prisoners of conscience since August 2017 in the northern Sugd Region in three separate cases. All received five years or more jail terms. Officials refused to explain what they had done wrong (see F18News 4 December 2017 http://www.forum18.org/archive.php?article_id=2336).

Religion Law changes in 2018 have imposed further restrictions, including: allowing the state to restrict manifestations of freedom of religion or belief on a wide range of grounds not permitted under international human rights obligations; increasing religious organisations' requirements to report all their activity to the state; requiring state approval for the appointment of all Imams; and increasing state control both on religious education at home, and on those travelling abroad for such education. The changes also make it even more difficult for Muslims who are not Sunni and Hanafi (the only permitted Islamic school) to establish mosques (see F18News 19 February 2018 http://www.forum18.org/archive.php?article_id=2354).

The mosque closure campaign parallels similar forced closures when Tajikistan was part of the Soviet Union. Throughout all the territory of the Soviet Union very large numbers of mosques, churches and other places of worship were closed, and their buildings confiscated for secular uses.

On 5 February 2018 Khuseyn Shokirov, who is responsible for the SCRA's work with mosques, claimed at a press conference that "1,938 illegal mosques were in 2017 converted to cultural and medical centres, kindergartens, teahouses and so on". Shokirov also claimed that 231 mosques were given more time to prepare documents. He claimed that the closed mosques "did not have proper documents for land, and some of them were not officially registered as religious communities", Asia-Plus noted on 5 February. This type of excuse is normal when the authorities close mosques (see Forum 18's Tajikistan religious freedom survey http://www.forum18.org/archive.php?article_id=2138).

The authorities also used the excuse that "many of those mosques did not have proper certificates from the State Land Committees or the SCRA", Faizinisso Vokhidova, an independent human rights defender from the capital Dushanbe, told Forum 18 on 20 February.

However, human rights defender Vokhidova pointed out that this does not make the mosques illegal. "Without the endorsement of the local authorities and Land Committees the mosques could not have been built," she stated, "because otherwise the authorities would have raided these buildings and closed them down a long time ago." She also noted that some of the closed mosques were at least 50 years old, and so were built during the Soviet period.

Human rights defender Vokhidova also pointed out that "it is the duty of the Land Committee and the SCRA to provide existing communities with all necessary documents for their mosque buildings and not wait for them to request them". So they cannot be described as illegal because of certain missing papers.

Many in Tajikistan fear discussing freedom of religion and belief and other human rights violations, for fear of state reprisals (see Forum 18's Tajikistan religious freedom survey http://www.forum18.org/archive.php?article_id=2138). Human rights defender Vokhidova stated that she knew of many closed mosques had refused to complain about their closure, even when offered legal assistance in bring court cases. "They were afraid to do so", Vokhidova told Forum 18.

Press conferences were in early January held in various parts of Tajikistan to announce local mosque closures and the alleged reasons for this. Two typical examples were in the northern Sugd Region, in Isfara and in Bobojon-Gofurov District.

On 24 January Dilshod Rasulzoda, then-Head of Administration in Isfara, told a press conference that 45 mosques were closed in the city in 2017 due to "discrepancy with sanitary rules and inappropriate conditions in them". He then claimed that local residents asked for the mosques to be converted to secular uses.

However, a former Imam of a mosque in Isfara forcibly closed in 2017 stated on 21 February 2018 that Muslims from his district now have to go to a mosque in a neighbouring mahalla (residential area). "Many of the Muslims from my mosque are old and some are ailing. It is hard for them to walk several kilometres on unlit streets, especially in the early morning and late evening". The Mosque had existed since Soviet times.

Rasulzoda refused to talk to Forum 18 on 16 February, and has been dismissed from his position. Isfara Administration Press Secretary Ikbol Teshayev told Forum 18 on 20 February that Rasulzoda's dismissal was not related to mosque closures. When asked about the mosque closures, he refused to discuss them and then claimed "We still have 100 five-fold mosques functioning, and they can attend those".

Five-fold mosques are the smallest size of mosque permitted, and are intended for districts with a population of between 100 and 1,000 people (see Forum 18's March 2011 Tajikistan religious freedom survey http://www.forum18.org/archive.php?article_id=1553). As Isfara has a population of over 250,000 people, Forum 18 asked what would happen if more than the maximum mosque capacity of 10,000 wanted to attend mosques. Teshayev refused to answer the question and then refused to talk more to Forum 18.

Zarif Valizoda, Head of Bobojon-Gofurov District Administration, told a 30 January press conference that 46 mosques were closed down in the District in 2017 "because they were built illegally. Some of them were built 50 metres away from each other". Like his then-colleague Rasulzoda of Isfara, Valizoda also claimed that local residents asked for the mosques to be converted to secular uses.

When Forum 18 asked Valizoda on 20 February why these previously-existing mosques have become illegal, he claimed that "I never said they were illegal." Asked why they were closed, Valizoda claimed that "we did not close down the mosques, but the local residents asked us to convert their mosques into various facilities and use them for different purposes".

Administration head Valizoda then claimed to Forum 18 that "all the mosques that were closed down only had up to 30 people attending". Similar excuses have long been used by the authorities (see eg. F18News 10 October 2007 http://www.forum18.org/archive.php?article_id=1032).

Valizoda claimed that there were still 136 five-fold mosques in the district. When Forum 18 asked how their maximum permitted capacity of 13,600 could accommodate the roughly 360,000 people in the District who might attend Friday prayers, Valizoda would not answer.

Q: Why are mosques being closed? A: "What an idiot".

The authorities are highly dismissive of questions about the mosque closures. When Forum 18 on 19 February asked Shokirov of the SCRA why so many mosques were forcibly closed, he claimed that he could not hear the question and then put the phone down. When Forum 18 rang back, a recorded message with a female voice repeatedly said: "Who are you, where are you calling, what an idiot". On 20 February Shokirov's phone was answered with the same recorded message, but this time with a male voice.

SCRA Legal Expert Abdurakhmon Mavlanov refused to discuss the enforced mosque closures on 15 February, and did not answer his phone at any time between 15 and 19 February.

In videos from October 2017 seen by Forum 18, SCRA representative Shokirjon Holdorov is apparently seen demanding the closure of a mosque in Rudaki District, to the south of Dushanbe. In one video Holdorov is apparently drunk according to others in the film. Holdorov then threatens the imam and mosque attendees using foul language. "I have been warning you for six months. If you don't shut this down, I will label you all Salafis and you will all go to jail", the man who appears to be Holdorov states.

The mosque was later closed, and Holdorov was "given a verbal warning for his behaviour" Eurasianet reported on 5 February 2018. (END)

At least nine Muslim men – including an imam and a well-known heart surgeon - are known to have been jailed as prisoners of conscience since August in the northern Sugd Region in three separate cases. All received five years or more jail terms. Officials refused to explain what they had done wrong.