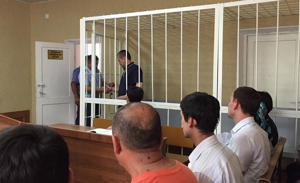 Bakhrom Kholmatov (in cage at trial), Khujand City Court, 2017
World Watch Monitor
The 42-year-old prisoner of conscience Kholmatov, who is married with three children, was first held in NSC secret police custody after his 10 April arrest (see F18News 28 April 2017 http://forum18.org/archive.php?article_id=2276). While on trial he was held in a police detention centre, and he has now been moved to an unknown prison.

The authorities have threatened family members, friends, and church members with reprisals if they reveal any details of the case, trial, or jailing to anyone. "We are afraid of more arrests or other punishments", Protestants told Forum 18.

The National Security Committee (NSC) secret police, together with the State Committee for Religious Affairs (SCRA) and other state agencies, raided Sunmin Sunbogym's affiliated congregations in Sugd Region in early February. Officials closed down the congregation in the town of Konibodom in March after interrogating and torturing church members, and NSC secret police officers pressured employers into firing church members from their jobs. The NSC arrested Pastor Kholmatov on 10 April after they raided his Church also, and harassed and physically tortured with beatings its members (see F18News 28 April 2017 http://forum18.org/archive.php?article_id=2276).

Protestants in Tajikistan state that they do not know the exact details of the jailing of prisoner of conscience Kholmatov, but do know that he was jailed for allegedly "singing extremist songs in church and so inciting 'religious hatred'". The charges were brought after the February raid, when the NSC secret police claimed that songs based on Biblical passages, such as "Praise God, oh the godless country", "God's army is marching", and "Our fight is not against flesh and blood" are "extremist and call on people to overthrow the government". The NSC also claimed that a book, "More Than a Carpenter" by American Protestant author Josh McDowell, is also "extremist". The "experts" who concluded this are imams working for the NSC (see F18News 28 April 2017 http://forum18.org/archive.php?article_id=2276).

Prisoner of conscience Kholmatov was jailed under Criminal Code Article 189, Part 1 ("Inciting national, racial, local or religious hatred or dissension, humiliation of national dignity, as well as propaganda of the superiority of citizens based on their religion, national, racial, or local origin, if committed in public or using the mass media").

Similar charges of "inciting religious hatred" were brought against Muslims whose "crime" was to film police harassment of women for wearing the hijab (Islamic headscarf) (see F18News 26 April 2016 http://forum18.org/archive.php?article_id=2172). Many Muslims who exercised their freedom of religion and belief have been jailed "to scare the population", human rights defenders have told Forum 18 (see F18News 19 May 2016 http://forum18.org/archive.php?article_id=2180).

President Emomali Rahmon and other officials, as well as state TV, have once again attacked women who wear the hijab and men who wear beards. On 19 July the authorities raided the capital Dushanbe's open air Shankhai-bazaar market targeting male and female Muslims who ignore the government's orders to them about their appearance (see F18News 2 August 2017 http://www.forum18.org/archive.php?article_id=2301).

Harsh state restrictions on exercising freedom of religion or belief

In defiance of its international human rights obligations, Tajikistan severely restricts rights to freedom of religion or belief. The authorities impose a ban on all exercise of freedom of religion or belief without state permission; severe limitations on the numbers of mosques permitted and activities allowed inside those mosques; arbitrary official actions, including the arrests of Jehovah's Witnesses using police agent provocateurs; bans on Jehovah's Witnesses and some Islamic and Protestant movements; the banning of Central Asia's only legal religious-based political party, the Islamic Renaissance Party, and the arrest as prisoners of conscience of its senior party figures; forcing imams in state-controlled mosques (the only sort permitted) to preach state-dictated sermons; forcible closure of all madrassahs (Islamic religious schools); a ban on all public exercise of freedom of religion or belief, apart from funerals, by people under the age of 18; and state censorship of and bans on some religious literature and websites (see Forum 18's Tajikistan religious freedom survey http://www.forum18.org/archive.php?article_id=2138).

Khujand City Administration's chief religious affairs official, Mukhsin Mirkamolov, claimed: "The Court tried him in the name of the state of Tajikistan. It was not prejudiced against him as a Christian", he told Forum 18 on 18 July. "All religions are equal and free in Tajikistan. He violated the law and was therefore tried." He refused to give more specific details of the case, and referred Forum 18 to the Court.

An official who answered the phone of Judge Mavjuda Sharifzoda, Chair of Khujand Court, on 14 July immediately put the phone as soon as they heard the name Forum 18. The telephones of both the Court and its Chancellery were not answered between 14 and 20 July.

Similarly reluctant to discuss the case was Khuseyn Shokirov, who is the SCRA official in the capital Dushanbe overseeing registration of religious organisations. "We do not know the details of the case. We wrote a letter to the regional authorities, but have not received an official response yet", he claimed to Forum 18 on 19 July. He then referred Forum 18 to the NSC secret police, who did not answer their telephones.

Local Protestants told Forum 18 that the Church had appealed against the verdict, but the result is unknown.

When Forum 18 asked why Pastor Kholmatov was targeted, Mirkamolov of Khujand City Administration claimed that "the case has nothing to do with the Church. It continues to function. The Pastor, not the Church, violated the law."

Mirkamolov also claimed that "everything is normal with the Church. They already appointed a new Pastor". Asked whether the appointment of a new Pastor was a demand by the authorities, he claimed that: "All religions are free in Tajikistan and the state does not interfere in their activity." Protestants told Forum 18 that the Church is currently being led by Pastor Kholmatov's deputy.

Protestants strongly disputed officials' claims, stating: "Church meetings continue, but how can things be normal after all that happened? The Church is very concerned for the Pastor", they said. "A large of group of believers have stopped attending the Church after the raids, interrogation and harassment. They are afraid of being arrested like the Pastor."

On 11 June the NSC secret police, with other officials, raided the Sunday worship meeting of Council of Churches Baptists in Dushanbe. The NSC filmed the worshippers, confiscated religious literature, and threatened to demolish the home where the Baptists were meeting (see F18News 29 June 2017 http://forum18.org/archive.php?article_id=2291).

Council of Churches Baptists refuse to register their churches, as they think this leads to state interference and international human rights law bans governments from insisting that state permission is necessary to exercise freedom of religion and belief.

In late June the SCRA wrote to Baptists demanding that they must register their Church. Pastor Pyotr Plett of the Baptist Church, told Forum 18 on 19 July that the authorities "left us alone after the incident". He said that no case was opened by the authorities and that the Church continues to meet for worship "without problems".

Forum 18 is also aware that in late April another Protestant elsewhere in Tajikistan was fined about 1,750 Somonis (about 1,610 Norwegian Kroner, 175 Euros, or 200 US Dollars) for in public giving someone a Tajik language New Testament. Police also confiscated Tajik language Bibles and New Testaments as well as his laptop computer from the Protestant. The authorities warned the Church that their members must not give out religious literature in public places.

There is strict state censorship of all religious texts, as well as of websites (see Forum 18's Tajikistan religious freedom survey http://www.forum18.org/archive.php?article_id=2138). (END)

Of the 19 madrassahs for 16 to 18 year old Muslims that functioned with state approval before the harsh 2009 Religion Law, all have now been closed. The five remaining madrassahs in Sugd Region – suspended in 2013 – were finally closed, as was the Islamic University's madrassah in Dushanbe.