Only six people will be allowed to attend the criminal trial in an Almaty prison of ailing defendant Zhuldyzbek Taurbekov, including only one relative. The trial is due to begin in the afternoon of Tuesday 3 December at Almaty's Investigation Prison No. 18. Taurbekov is suffering from a serious heart condition and his lawyer says his condition is worsening "from day to day". 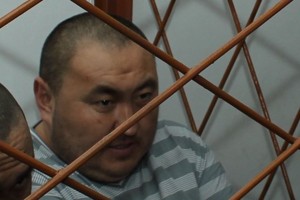 "I fear for my health and life," Taurbekov wrote to the court in an appeal to be released from Investigation Prison (see below).

Taurbekov is facing criminal charges of promoting "propaganda of terrorism" and "inciting hatred" for his participation in a WhatsApp discussion group about Islam which was monitored by the National Security Committee (KNB) secret police. He rejects the charges (see below).

KNB secret police Investigator Lieutenant-Colonel Rakhat Rustemov claimed that the WhatsApp group promoted terrorism. Neither he, nor the indictment, nor the four successive prosecutors during the trials appear to have tried to establish whether or not any of the defendants had committed or called for terrorism.

Among the messages the group's participants circulated was one by Azamat Umbetaliyev, warning about innovations in religion. An analysis of the message - commissioned by his defence lawyer from Adil Soz (Free Word) International Foundation for Protection of Freedom of Speech – found neither any incitement to hostility, aggression, or violence towards others based on their religious affiliation, nor any assertion or propaganda that anyone is superior or inferior to anyone else based on their religious affiliation.

A separate analysis of the prosecution's "expert analysis", commissioned by the defence from the St Petersburg Centre of Independent Expert Analysis and Evaluation, found that the Kazakh expert had conducted her analysis "subjectively".

The 41-year-old Taurbekov has already spent 13 months in pre-trial detention since the KNB arrested him and eight other Muslims in October 2018.

Taurbekov's mother, Asemgul Zhaugasheva, is being allowed access to the trial in her capacity of Taurbekov's public defender, the Judge's secretary told Forum 18 (see below).

Despite repeated calls, Forum 18 was unable to reach Prosecutor Maksat Daurbayev, who is due to lead the prosecution case at the trial (see below).

Taurbekov's case was due to his ill health separated from that of the other eight Muslim prisoners of conscience (including Umbetaliyev) on 3 July. The other eight were jailed on 5 August for between five and a half and eight years for participating in the WhatsApp religious discussion group. Almaty City Court rejected their appeals on 20 November.

On 27 October 2018, about 15 officers of the National Security Committee (KNB) with guns burst into the home of Zhuldyzbek Abikenovich Taurbekov (born 20 September 1978) in Almaty's Alatau District.

"They came with no warning," Taurbekov's mother Asemgul Zhaugasheva, who lives close by and was there at the time, told Forum 18 from Almaty on 26 November 2019. "The children were afraid, and we were in shock."

Zhaugasheva said the KNB officers showed a search warrant, but the family did not examine it because of the shock of the raid. "It was like in a film," she recalled.

The KNB officers handcuffed Taurbekov and took him away. They also searched the family home, taking copies of the Koran, history books and other books, as well as a mobile phone and an old computer.

"None of these books or materials was banned and they later returned them," Zhaugasheva added.

Taurbekov and the other eight Muslims were all taken to the KNB's Investigation Prison LA-155/18 in Almaty. Some of the men already knew each other, but others had never met and had only ever communicated via the group.

Article 256, Part 2 punishes "Propaganda of terrorism or public calls to commit terrorism", which includes the production, storage for distribution or distribution of [unspecified in the Article] specified materials, carries a punishment of five to nine years' imprisonment plus confiscation of property. If committed by an individual using a state or non-state official position, or with the use of the mass media or other communication networks, or with foreign support, or in a group, the punishment is seven to 12 years' imprisonment with confiscation of property.

Article 174, Part 2 punishes "Incitement of social, national, clan, racial, or religious discord, insult to the national honour and dignity or religious feelings of citizens, as well as propaganda of exclusivity, superiority or inferiority of citizens on grounds of their religion, class, national, generic or racial identity, committed publicly or with the use of mass media or information and communication networks, as well as by production or distribution of literature or other information media, promoting social, national, clan, racial, or religious discord". Punishment under Part 2, when such actions are carried out by a group of people, is a jail term of between five and ten years.

Neither KNB Investigator Rakhat Rustemov, nor the indictment, nor the four successive prosecutors during the trial of the eight at Almaty's Almaly District Court appear to have tried to establish whether or not Nurgaliyev and the other defendants had committed or called for terrorism.

Prosecutors presented the case against all nine Muslims – including Taurbekov – to Almaty's Almaly District Court on 27 February. The trial began on 12 March under Judge Kairat Imankulov. He jailed all eight other defendants for up to eight years at the end of the trial on 5 August. 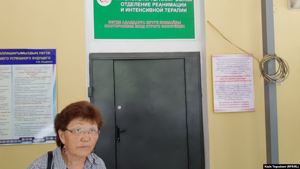 Asemgul Zhaugasheva outside Almaty Cardiology Centre, 29 June 2019
Kazis Toguzbayev (RFE/RL)
Taurbekov attended some of the earlier hearings at the trial at Almaly District Court, but the last time he was brought to court was to the 24 June hearing. On 27 June he was taken from Investigation Prison to hospital.

As his health worsened, Judge Imankulov separated Taurbekov's case from that of the other eight Muslims on 3 July. On 30 July he was taken again to a cardiology centre but taken back to the Investigation Prison after four hours. Taurbekov's mother Zhaugasheva stated that he needs a heart transplant.

Taurbekov's family stated in July that his health suffered because of lack of medical attention during his long detention in an Investigation Prison and he now needs a heart transplant.

The United Nations (UN) Standard Minimum Rules for the Treatment of Prisoners (known as the Mandela Rules, A/C.3/70/L.3) also applies to people such as Taurbekov in pre-trial detention. Rule 27 states in part: "Prisoners who require specialized treatment or surgery shall be transferred to specialized institutions or to civil hospitals .. Clinical decisions may only be taken by the responsible health-care professionals and may not be overruled or ignored by non-medical prison staff."

On 22 October, the Public Health Administration certified that doctors had diagnosed Taurbekov with cardiomyopathy, a disease of the heart muscle that makes it harder for the heart to pump blood to the rest of the body. He was given a certificate as a "second category invalid", as someone who suffers "persistent severe impairment of bodily functions" which reduce his ability to move, look after himself or work.

Taurbekov's lawyer Farkhat Guliyev then submitted an appeal to Almaly District Court (seen by Forum 18) to have Taurbekov transferred out of pre-trial detention because of the diagnosis. He pointed out that under an Interior Ministry decree of 12 August 2014 individuals with cardiomyopathy are subject to exemption from serving sentences.

Taurbekov also submitted a two-page handwritten letter (seen by Forum 18) with his lawyer's appeal. "At any moment I could suffer a heart attack," he told the court. "In this prison I am not given any medical attention at all. I fear for my health and life." He directly attributed his worsening condition to the "negligent attitude" of the prison staff.

Taurbekov's mother Asemgul Zhaugasheva says that her son's health was good when he was arrested. "He was healthy and sporty, regularly playing football," she told Forum 18. "But he was under heavy stress in prison, and the problems with his heart started then. I myself had a heart operation three years ago – I know how he feels."

Zhaugasheva visited her son in prison on 25 November. "He is holding out, but needs to go to the capital for them to determine if he needs an operation," she told Forum 18.

Prosecutors handed the separate criminal case against Taurbekov to Almaly District Court on 5 August, according to court records. It too was assigned to Judge Kairat Imankulov who had, that day, sentenced the other eight Muslims to long jail terms.

Taurbekov's trial is due to begin at 2:30pm on 3 December in the court room of Almaty's Investigation Prison LA-155/18, the Judge's secretary told Forum 18 from the court on 26 November.

"It will be an open trial," the secretary insisted to Forum 18. Asked if Taurbekov's relatives and friends would therefore be free to attend, she replied: "No, it is a closed institution and entry will be by permit."

She said only six people will be able to attend, Judge Imankulov, herself as secretary, Prosecutor Maksat Daurbayev, lawyer Farkhat Guliyev, Taurbekov himself, and Taurbekov's mother Zhaugasheva in her capacity as his public defender.

Taurbekov is being held in the police's Investigation Prison LA-155/18 in Almaty's Turksib District. It is there that his trial is due to be held.

Taurbekov's wife has not seen her husband for more than two months. Their two children (aged 3 and 2) have not seen Taurbekov since his October 2018 arrest. Taurbekov also has two older children from his first marriage. 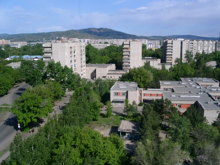