The closed trial of Dilmurat Makhamatov at a court in Kazakhstan's southern city of Shymkent is due to resume on the morning of 22 April. The 41-year-old ethnic Uzbek Sunni Muslim is facing charges of "inciting religious hatred" (with a maximum 10 year jail term) and "propaganda of terrorism" (with a maximum nine year jail term) in remarks he made in Saudi Arabia about Islam. 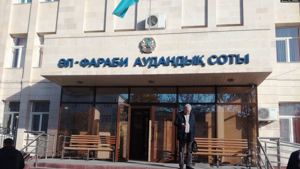 Al-Farabi District Court, Shymkent
Dilara Isa (RFE/RL)
Kazakh police claimed in October 2018 Makhamatov had been involved in "illegal preaching among Kazakhstanis via the internet" and "illegal missionary activity" while in Saudi Arabia. After he was forcibly taken to Kazakhstan charges of "inciting religious hatred" and "propaganda of terrorism" were revealed (see below).

The National Security Committee (KNB) refused to discuss what Makhamatov said that they claim "incited religious hatred" or propagated "terrorism" (see below).

Makhamatov's friends insisted to Forum 18 that he made no remarks calling for the violation of others' human rights (see below).

Makhamatov's trial began at Shymkent's Al-Farabi District Court on 4 April, with a further hearing on 15 April. The branch in Shymkent of the Kazakhstan International Bureau for Human Rights and the Rule of Law asked to observe the trial. "But the court told us and local journalists on the phone that the trial was closed," Adil Seitkaziyev told Forum 18. "They did not explain why" (see below).

Makhamatov has been in detention since mid-December 2018, when the Kazakh authorities succeeded in forcibly returning him from Saudi Arabia, where he and his family had lived for about 20 years (see below).

The National Security Committee (KNB) secret police launched the case and undertook the initial investigation. The KNB had been seeking to extradite and prosecute Makhamatov since 2016, and commissioned at least three "expert analyses" of his comments on Islam (see below).

During the pre-trial investigation, KNB investigator Lieutenant-Colonel Abzal Sarsebayev repeatedly refused to discuss with Forum 18 why the Kazakh authorities wanted Makhamatov's return and why he thinks he is guilty (see below).

If convicted, Makhamatov is also likely to be added to the Finance Ministry Financial Monitoring Committee List of individuals "connected with the financing of terrorism or extremism". Being added to the List means that any bank accounts an individual may have are blocked with no further legal process. Their families are allowed to withdraw only small amounts for daily living if they do not have other sources of income. Individuals remain on the Financial Monitoring Committee List for six or eight years after their sentence has expired.

Forum 18 knows of at least 18 other individuals serving prison sentences in Kazakhstan to punish the exercise of freedom of religion or belief. A further 11 individuals are known to be serving sentences of restricted freedom, where they live at home under restrictions. All 29 of these individuals are Sunni Muslims.

Many of the 29 currently serving sentences have been sentenced for alleged membership of the Tabligh Jamaat Muslim missionary movement, which has been banned in Kazakhstan since 2013.

Kazakhstan has also sought the extradition and return to the country of Muslims living and working abroad in order to jail them. It has especially targeted those whose preaching or comments about Islam have been placed.

Kazakhstan gained Imam Abdukhalil Abduzhabbarov's extradition from Saudi Arabia and he was arrested as he landed back in the country in 2017. He was jailed for eight years in August 2017 for sermons he gave before he left Kazakhstan in 2006. The Supreme Court refused to hear his last-ditch appeal in November 2018.

In addition, four Sunni Muslims who had studied their faith at a Saudi Arabian university and had themselves returned to Kazakhstan were jailed in separate cases in 2017.

One Muslim however, Murat Bakrayev, was saved from extradition back to Kazakhstan. The Kazakh authorities were seeking his extradition to punish him for talks on Islam others had recorded and posted online. A German court rejected Kazakhstan's extradition request and freed him from detention in February 2019. As of 16 April, Bakrayev remains on the wanted list on the Kazakh General Prosecutor's Office website.

Makhamatov's trial began with hearings on 4 April and resumed on 15 April, according to court documents. It is set to continue at 10 am on 22 April. A lawyer from Makhamatov's home town of Saryagash is representing him in court.

Volma Bakhmudova from Shymkent's Al-Farabi District Prosecutor's Office is leading the case in court. Forum 18 has been unable to reach Bakhmudova.

Makhamatov is being tried under Criminal Code Article 174, Part 2 and Article 256, Part 2, the Court chancellery told Forum 18 from Shymkent on 11 April.

Article 174, Part 2 punishes "Incitement of social, national, clan, racial, or religious discord, insult to the national honour and dignity or religious feelings of citizens, as well as propaganda of exclusivity, superiority or inferiority of citizens on grounds of their religion, class, national, generic or racial identity, committed publicly or with the use of mass media or information and communication networks, as well as by production or distribution of literature or other information media, promoting social, national, clan, racial, or religious discord" when carried out by a group of people, in an official capacity, more than once, or with violence or the threat of violence. Punishment is five to 10 years' imprisonment, with a possible ban on specific activity for three years.

Article 256, Part 1 punishes: "Propaganda of terrorism or public calls to commit an act of terrorism, as well as the production, storage with the aim of distribution or the distribution of material of such content". Punishment is five to nine years' imprisonment, plus confiscation of property.

The branch in Shymkent of the Kazakhstan International Bureau for Human Rights and the Rule of Law asked to observe the trial. "But the court told us and local journalists on the phone that the trial was closed," the head of the branch Adil Seitkaziyev told Forum 18 on 12 April. "They did not explain why."

Makhamatov lived with his family in Saudi Arabia for some 20 years, his friends told Forum 18. "People came to him from Kazakhstan and other former Soviet republics to ask him about Islam and the Koran," one person told Forum 18. "They often recorded his remarks and put them on the internet. The Kazakh authorities claim these were lectures, but they weren't."

Makhamatov had rarely visited Kazakhstan since his move to Saudi Arabia. He returned in 2014 to get a new passport. "During that visit, the KNB secret police warned him to stop making public remarks," the individual told Forum 18.

Forum 18 has been unable to establish when the KNB secret police began moves to extradite Makhamatov from Saudi Arabia. However, it appears such moves began in 2016, the first year the KNB commissioned an "expert analysis" of some of Makhamatov's remarks on Islam. The KNB commissioned further such analyses in 2017 and 2018.

The original KNB Investigator in the case, Lieutenant-Colonel Abzal Sarsebayev, repeatedly refused to discuss the prosecution of Makhamatov with Forum 18 in February 2019.

After Makhamatov's arrest, KNB Investigator Sarsebayev ordered a further "expert analysis" of recordings of some of his remarks on Islam. As the Investigator refuses to discuss the case with Forum 18, it has been unable to find out what claims the "experts" made about Makhamatov's remarks in this and the earlier analyses.

Makhamatov's friends insisted to Forum 18 that he made no remarks calling for the violation of others' human rights.

The Saudi authorities detained Makhamatov in October 2018 at Kazakh request. "A representative of the Salafi movement, Dilmurat Makhamatov, born in the city of Saryagash, engaged in illegal missionary activity, was detained by the law-enforcement agencies of the Kingdom of Saudi Arabia," an unidentified Kazakh District Police told local news agencies on 15 October 2018. "Being in that country, he engaged in illegal preaching among Kazakhstanis via the internet."

Soon after detaining him, the Saudi authorities apologised to Makhamatov and released him. However, Kazakh KNB officers seized him in Saudi Arabia in December 2018 and forced him onto a flight at Jeddah airport back to the country via Abu Dhabi. They told him they had issues they needed to discuss with him back in Kazakhstan.

Once in the Kazakh capital Astana, officers put him on a flight to the southern city of Shymkent. Officers arrested him as soon as he landed there on 19 December. He was transferred to the KNB Investigation Prison in Shymkent. On 21 December, Judge Kamshybek Anarbayev of Shymkent Investigation Court ordered him held in pre-trial detention for two months.

Makhamatov has two wives and a total of nine children. His family, who returned from Saudi Arabia soon after his return, is now living in a village near his birthplace of Saryagash in Turkistan Region, the region surrounding Shymkent. 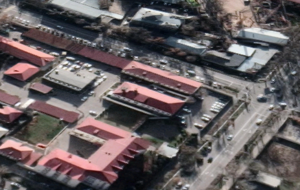 KNB secret police offices and Investigation Prison, Shymkent
Google/DigitalGlobe
Makhamatov's conditions in the KNB Investigation Prison in Shymkent are "satisfactory", a friend told Forum 18 in February. "He can pray the namaz there and has access to the Koran." He is allowed two short visits from relatives each month.

Others who have been able to visit Makhamatov in the prison told Forum 18 he did not report any instances of torture or maltreatment. He said he had access to the Koran and to regular exercise.

The telephone at the Investigation Prison went unanswered each time Forum 18 called on 16 April.

Many Muslim prisoners of conscience jailed for exercising their freedom of religion or belief have stated that they are banned from reading the Koran and other religious books, and prevented from saying the namaz (obligatory Muslim daily prayers). This and the forcible shaving off of beards appears to be a standard punishment imposed on such prisoners.