In the southern city of Bukhara, a court fined a Christian, Shukhrat Safarov, about two weeks' average wages for giving an Uzbek-language New Testament away as a present. The judge ordered that the New Testament be destroyed. Police had found the New Testament during a search of the recipient's home. The authorities committed multiple illegalities throughout the case.

After a late September 2018 police raid on a group of 40 Protestants meeting in Tashkent Region, where police "psychological pressure" resulted in a woman and a 5-year-old girl being hospitalised, a court has upheld the fines on 27 local Christians and deportations of four South Korean Protestants (see below).

No prosecutions appear to have been brought against the police who carried out torture, despite Uzbekistan's legally-binding obligations under the United Nations Convention against Torture and Other Cruel, Inhuman or Degrading Treatment or Punishment (see below). 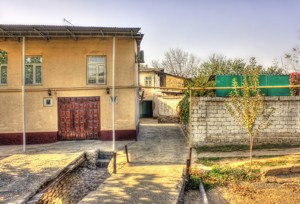 Tashkent
Daniel Mennerich/Flickr [CC BY-NC-SA 2.0]
And after a large November 2018 raid involving the National Guard and other agencies on Baptists meeting for Sunday morning worship in Yashnobod District in the capital Tashkent, police returned some of the Christian literature they confiscated. However, they have not returned children's literature, song books, and music notes. The authorities do not appear to have brought any prosecutions or other actions against the officials who acted illegally (see below).

In December 2018 Shukhrat Safarov, a Protestant in the southern city of Bukhara [Bukhoro], gave a local woman an Uzbek-language New Testament. Police subsequently searched her flat in Karakul District and found the New Testament, local Protestants who wish to remain unnamed for fear of state reprisals told Forum 18 on 27 January 2019.

Police officer Begzod, who refused to give his last name, told Safarov on 5 January that the search allegedly happened because of "because of complaints against her from residents of her mahalla [residential area]". Police confiscated the New Testament, even though she told officers it was a gift.

Police often search homes for religious literature of all kinds, and mahalla committees are a key part of the regime's attempts to control all of society.

On 27 December 2018 a police officer illegally forced his way into Safarov's flat without being invited, without a search warrant, and refusing to show any identification. The unidentified officer then demanded that Safarov accompany him to Bukhara Police Station. Safarov refused to do so without the legally required officials summons.

When Safarov received an official summons he came to the Police Station on 5 January. There, a police officer who claimed his name was Begzod – illegally without giving his last name, or showing his identification – told Safarov he was being charged with breaking Administrative Code Article 184-2 ("Illegal production, storage, or import into Uzbekistan, with the intent to distribute or actual distribution, of religious materials by physical persons"), and Article 240, Part 2 ("Attracting believers of one confession to another (proselytism) and other missionary activity"). Officer Begzod also broke the law by not showing Safarov the police case files.

Against international human rights standards, the regime has made it illegal for anyone to share any beliefs with anyone else.

Officer Begzod did show Safarov an "expert analysis" of the New Testament by Begzod Kadyrov, Chief Specialist of the government's Religious Affairs Committee in Tashkent. Kadyrov stated that the New Testament was legally imported, but its use for missionary purposes is illegal. Local Protestants pointed out that this violates the legally-binding international human rights standards that the regime has signed.

Kadyrov refused to answer Forum 18's questions on 28 January. "I have no time to listen to your fables," he claimed, before putting the phone down.

Uzbekistan imposes total censorship of all printed and electronic religious literature, and police often confiscate books which have passed the state's compulsory censorship. The regime has repeatedly tried to stop followers of religious beliefs, including Christians, from reading their own sacred texts in their own homes.

Bukhara Police told Forum 18 on 29 January that Safarov's case is being dealt with by Begzod Toshpulatov of Bukhara Police Struggle with Extremism and Terrorism Department.

Toshpulatov refused to explain why he broke the law during his questioning of Safarov, or why any action is being taken against Safarov. "I do not know you, and I cannot discuss this with you over the phone," he claimed on 29 January. "You need to come to our Police Station so we can talk." When Forum 18 asked why people are punished for owning Bibles or New Testaments or giving them to others, Toshpulatov repeated his previous claim and refused to talk more.

On 15 January, Judge Ruslan Zairov of Bukhara Administrative Court fined Safarov three times the minimum monthly wage or 552,900 Soms. This is equivalent to about two weeks' average wages for those in formal work. The Judge also ordered the destruction of the confiscated Uzbek-language New Testament.

Courts often order the destruction of confiscated religious literature, and the regime is particularly hostile to non-Muslim religious believers using Uzbek (the state's official language) in religious texts. The use of Uzbek by non-Muslims as the main language of public worship is banned, even though the ban has no legal basis.

A Bukhara Court Chancellery official, who refused to give her name, refused to tell Forum 18 on 28 January why Safarov was fined. Judge Zairov "is busy and cannot come to the phone", she claimed.

After a late September 2018 police raid on a group of 40 Protestants meeting in Tashkent Region, where police "psychological pressure" resulted in a woman and a 5-year-old girl being hospitalised, a court imposed large fines on many of the participants. The prosecution used four women who accompanied police on the raid as witnesses in the case, despite being accused by Protestants of stealing property from some of the Protestants. Neither the thieves nor the officials suspected of torture were prosecuted.

On 19 December, Judge Uchkun Tursunov of Tashkent Region's Administrative Court upheld the fines on 27 local Christians and deportations of four South Korean Protestants. No prosecutions appear to have been brought against the police who carried out torture, despite Uzbekistan's legally-binding obligations under the United Nations Convention against Torture and Other Cruel, Inhuman or Degrading Treatment or Punishment.

Court officials have repeatedly refused up to 25 January 2019 to answer Forum 18's questions as to why there was no investigation of the police's illegal actions, including torture.

On 25 November 2018, 20 plain clothes officials rising later to 40 officials raided Baptists meeting for Sunday morning worship in Yashnobod District in the capital Tashkent. For the first known time in such raids, members of the military – the National Guard – took part in the raid. Other agencies participating in the raid included the State Security Service (SSS) secret police, the Justice Ministry, and Yashnobod District Police. When Baptists asked why the SSS secret police and the National Guard were on the raid, the raiders responded: "It is a special operation".

Officials searched every part of the building, which was "ransacked", Baptists complained. Officials confiscated about 7,800 items of literature and DVDs, including all books and songbooks the Church uses for its meetings for worship. When one woman tried to conceal some songbooks used for worship, an official "screamed at her that you are liars, Christians must not hide anything". Police threatened Baptists they "will come every Sunday and disrupt the Church service every time until we give up and stop our activity".

However, the authorities have not yet carried out those threats. On 27 December police returned some of the Christian literature they had confiscated during the raid. However, Andrei Serin of the Church told Forum 18 on 22 January that the "we still need the children's literature, song books, and music notes to be returned as we need them for conducting worship".

The authorities do not appear to have brought any prosecutions or other actions against the officials who acted illegally. (END)