"There is a special mechanism to destroy such items," Judge Olzhas Abdukalikov of Kyzylorda Specialised Administrative Court told Forum 18. "I don't know how they destroy books." The Judge said the books were handed over to Kyzylorda City Police to carry out the destruction. Forum 18 was unable to reach anyone at the City Police (see below).

Judge Abdukalilov's destruction order was one of two such court decisions in 2018, found by Forum 18 in a review of administrative punishments for exercising freedom of religion or belief. At least 166 individuals and companies are known to have faced prosecution, with most fined. 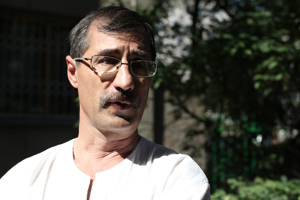 Yevgeny Zhovtis, 26 July 2013
BBC World Service/Flickr [CC BY-NC 2.0]
The other known religious literature destruction in 2018 was ordered by Judge Aigul Sadvakasova of Zharma District Court. She ordered destroyed one copy of the 1994 Kazakh-language book "Bible Stories" on 29 December 2018. She refused to discuss her decision with Forum 18 (see below).

On 3 January 2019, a court in the southern Zhambyl Region ordered two Muslim books by one of the leading figures in the Tabligh Jamaat Muslim movement destroyed. The court also fined the books' owner (see below).

"Sad", "ABSURD" and "not in accord with international standards" are some of the responses to the court orders to destroy religious books (see below).

However, a state religious affairs official in the capital Astana who monitors religion-related administrative cases refused to discuss with Forum 18 court orders to destroy religious books – or the many other punishments handed down for exercising freedom of religion or belief (see below).

Equally critical is Tamara Kaleyeva, head of the free speech organisation Adil Soz (Free Word). Such religious book confiscation and destruction orders "are not in accord with international standards – that's obvious", she told Forum 18 from Almaty on 17 January. "We of course condemn this."

"I can't comment on our laws," Alkhaliyev told Forum 18 the same day. Asked about court-ordered religious book destructions – and other punishments for exercising freedom of religion or belief - he refused to discuss them and put the phone down. When Forum 18 immediately called back, the line had been switched to a fax machine.

"It is barbarism to destroy books"

An Astana-based court bailiff - who has witnessed the destruction of religious books - explained to Forum 18 in November 2015 that bailiffs throw books ordered destroyed – including religious books – into the rubbish bin. "They are normally disposed off at a general rubbish dump outside the city."

Yevgeny Zhovtis of the Kazakhstan International Bureau for Human Rights and the Rule of Law condemned a similar court order to destroy books seized from Seventh-day Adventist Yklas Kabduakasov and others in a 2015 criminal case. "It is barbarism to destroy books," he told Forum 18 in December 2015. "And it makes the authorities in Kazakhstan - who position themselves as modernising the country - look from the cultural point of view like the Taliban or ISIS."

Confiscation and destruction of religious literature seized in administrative prosecution cases remains a threat in many cases. After police officers seized a German-language Bible from Mikhail Syzdykov on 2 August 2018 which he was trying to sell for 5,000 Tenge via the website Olx.kz, a court in Petropavl on 26 September fined him 120,250 Tenge.

"The seized book, the Bible in German, is to be returned to its owner," the court decision reads, "since it is not of value and is not subject to destruction."

For those who distribute, sell or offer religious literature – and items such as pictures, icons or jewellery which have a religious motif – without specific state permission or in locations that the state has not specifically approved are routinely punished with, for individuals, fines of up to several months' average wages.

Tamara Kaleyeva of Adil Soz condemns this state censorship of religious materials. "This censorship contradicts international human rights standards," she told Forum 18 on 17 January, "but unfortunately it is in the law. All attempts to change this have not resulted in any change so far."

Trouble began for Askarbek Sarsenov, a then 64-year-old commercial seller in the southern city of Kyzylorda, on 22 June 2018. Police found him offering for sale on the street a total of 85 copies of 6 Islamic booklets, according to the subsequent court decision seen by Forum 18. The booklets covered themes such as learning the Koran or prayer.

Kyzylorda Police began investigating Sarsenov under Criminal Code Article 174, Part 1. This punishes "Incitement of social, national, clan, racial, or religious discord, insult to the national honour and dignity or religious feelings of citizens, as well as propaganda of exclusivity, superiority or inferiority of citizens on grounds of their religion, class, national, generic or racial identity, committed publicly or with the use of mass media or information and communication networks, as well as by production or distribution of literature or other information media, promoting social, national, clan, racial, or religious discord". However, police dropped the case on 20 August "due to the absence of a crime".

On 4 September Police instead launched a case against Sarsenov under Administrative Code Article 490, Part 1, Point 3. This punishes "Violating the requirements of the Religion Law for .. import, manufacturing, production, publication and/or distribution of religious literature and other religious materials, and items for religious use". The punishment for individuals is a fine of 50 Monthly Financial Indicators (MFIs). This represents about a month's average wages for those in formal work (though a much greater burden for unemployed individuals and pensioners).

On 19 September 2018, Judge Olzhas Abdukalikov of Kyzylorda Specialised Administrative Court found Sarsenov guilty. He fined him 35 MFIs (about three weeks' average wages for those in formal work), imposed a three-month ban on unspecified activity and ordered the destruction of the booklets. The court decision orders that all 85 booklets be handed over to Kyzylorda Police to be destroyed.

Asked why he had ordered the Islamic booklets destroyed, Judge Abdukalikov responded: "Because [Sarsenov] doesn't need these books, plus he sold them where it wasn't allowed." He insisted to Forum 18 on 17 January that as a judge he is simply following the law. He refused to discuss whether it is the role of judges to order religious literature destroyed if they think an individual does not "need" it.

Forum 18 was unable to find out if Kyzylorda Police have destroyed Sarsenov's Islamic booklets and, if so, how. "There is a special mechanism to destroy such items," Judge Abdukalikov told Forum 18. "I don't know how they destroy books." The main telephone at Kyzylorda Police went unanswered each time Forum 18 called on 17 January.

Trouble began for Zairash Amanova, a then 53-year-old resident of the village of Kalbatau in East Kazakhstan Region, on 7 November 2018. Officials found her offering for sale on the Olx.kz website two religious books – one of them "Bible Stories" for 500 Tenge, the other a book on prayer.

Amanova was among at least 18 individuals fined in 2018 for offering religious literature, icons or other items for sale via the Olx.kz website.

An "expert analysis" of the 1994 book "Bible Stories", published by New Life, undertaken by the government's Scientific Research and Analytical Centre on Religious Issues in Astana found that it does not violate the Constitution, the subsequent court decision, seen by Forum 18, notes.

For offering the religious books for sale online, Amanova was accused of violating Administrative Code Article 490, Part 3. This punishes "Carrying out missionary activity without state registration (or re-registration), as well as the use by missionaries of religious literature, information materials with religious content or religious items without a positive assessment from a religious studies expert analysis, and spreading the teachings of a religious group which is not registered in Kazakhstan".

On 29 December 2018, Judge Aigul Sadvakasova of Zharma District Court found Amanova guilty. She fined her 35 MFIs (84,175 Tenge), about three weeks' average wages for those in formal work. She also ordered that the book "Bible Stories" be destroyed.

Forum 18 has been unable to find out to whom the task of destroying the book was assigned and whether the order has been carried out.

Judge Sadvakasova refused absolutely to discuss anything with Forum 18 on 17 January 2019. Asked why she had ordered Amanova's book destroyed, she immediately put the phone down.

Border guards seized two Muslim books on 3 December 2018 from Kyrgyz citizen Gulsanam Katkeldiyeva as she crossed into Kazakhstan near the village of Grodekovo in the southern Zhambyl Region. One of the books, "Fazail e Amaal" (Virtues of Deeds) by Muhammad Zakariya Kandhlawi, a key text for Tabligh Jamaat adherents, was banned by Alakol District Court in August 2016. The other book seized was "Life of the Companions" by Muhammad Yusuf Kandhlawi, another key Tabligh Jamaat text.

On 3 January 2019, Judge Abai Daurenbekov of Zhambyl District Court found Katkeldiyeva guilty under Administrative Code Article 490, Part 1, Point 3. He fined her 50 MFIs, 120,250 Tenge. He also ordered the two seized books to be destroyed, according to the court decision seen by Forum 18. (END)