A judge in Aktobe Region punished seven Muslims with restricted freedom sentences of one to three years for holding religious meetings. Four were also given 120 hours' community service. A court has awarded compensation to atheist writer Aleksandr Kharlamov who was held for six months during a nearly six-year criminal investigation.

On 9 July, a court in the north-western city of Aktobe [Aqtobe] convicted seven more Sunni Muslims on criminal charges of belonging to the banned Muslim missionary movement Tabligh Jamaat. All seven received terms of restricted freedom of between one and three years, where they live at home under restrictions. Four of them were also ordered to conduct 120 hours of community service. 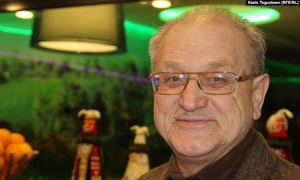 Aleksandr Kharlamov, 31 January 2015
Kazis Toguzbayev (RFE/RL)
The men were accused of creating a religious group, reading religious literature and spreading the "ideology" of the movement by sharing their faith with other local Muslims.

Zein Zhangaliyev from Aktobe Regional Prosecutor's Office, who led the prosecution case in court, refused to say if the seven men had harmed anyone. "I could explain who suffered from their actions, but I don't know who you are," he told Forum 18 (see below).

An officer of Aktobe Regional National Security Committee (KNB) secret police – which had arrested the seven in May – similarly told Forum 18 he was unable to give any information as to what the men might have done to harm others (see below).

Tabligh Jamaat was banned in Kazakhstan as "extremist" by an Astana court in February 2013. The movement's adherents often travel around the country encouraging other Muslims to greater piety, for which many members have also been fined (see F18News 28 March 2016 http://www.forum18.org/archive.php?article_id=2162).

The seven men's convictions bring to 72 the number of alleged Tabligh Jamaat adherents known to have been given criminal convictions since the beginning of 2015 to punish them for exercising freedom of religion or belief. Of these, 51 were given prison terms while 21 were given restricted freedom sentences (see F18News 22 May 2018 http://www.forum18.org/archive.php?article_id=2379).

The authorities impose harsh restrictions on all exercise of the right to freedom of religion or belief. Extra restrictions are imposed on Muslims (see Forum 18's Kazakhstan religious freedom survey http://www.forum18.org/archive.php?article_id=2409).

Meanwhile, on 10 July atheist writer and human rights defender Aleksandr Kharlamov won a civil suit in court and compensation for the first of the two criminal cases he was subjected to. As the case was investigated in 2013, he spent six months in pre-trial detention, including one month forcibly held in a psychiatric hospital. A police investigator in Ridder in East Kazakhstan Region finally closed the criminal case in April 2018 after nearly six years (see below).

Kharlamov intends to appeal against the level of compensation, which he considers too low for the abuses he suffered. He also intends to lodge a civil suit over the second criminal case against him, which was closed in August 2017 (see below).

Bank accounts to be blocked?

Now the seven alleged Tabligh Jamaat members in Aktobe have been convicted, they are almost certain to be added to the Finance Ministry Financial Monitoring Committee List of individuals "connected with the financing of terrorism or extremism". This means that any bank accounts they may have will be blocked with no further legal process. Their families will be allowed to withdraw only small amounts for daily living if they do not have other sources of income (see F18News 10 June 2016 http://www.forum18.org/archive.php?article_id=2187).

Three alleged Tabligh Jamaat members - Kazbek Laubayev, Marat Konyrbayev and Taskali Naurzgaliyev – were each jailed for three years in Karaganda on 6 April (see F18News 22 May 2018 http://www.forum18.org/archive.php?article_id=2379). The three were added to the Financial Monitoring Committee List on 15 June. 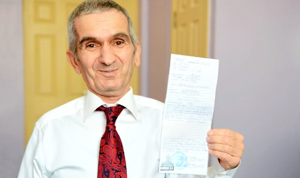 Jehovah's Witness former prisoner of conscience Teymur Akhmedov was removed from the Financial Monitoring Committee List on 3 May. He had submitted a formal application for this in April, soon after his release, Jehovah's Witnesses told Forum 18.

After nearly a year and a quarter in jail, cancer sufferer Akhmedov was freed on 4 April under a presidential pardon (see F18News 5 April 2018 http://www.forum18.org/archive.php?article_id=2366).

The Aktobe Regional National Security Committee (KNB) secret police arrested seven local Muslims in May. The seven were aged between 29 and 59. Five lived in Aktobe, while the other two lived in the small town of Khromtau, 90 kms (55 miles) east of Aktobe.

Two of those the KNB arrested - Zhanat Dosalin and Amanzhol Kishkentekov – were held in pre-trial detention at Aktobe Investigation Prison. The other five had to sign statements that they would not leave their home towns.

The KNB secret police opened a case against the seven men under Criminal Code Article 405. Dosalin and Kishkentekov faced prosecution under Parts 1 and 2 of the Article, the other five under Part 2 only.

Article 405, Part 1 punishes "organising the activity of a social or religious association or other organisation after a court decision banning their activity or their liquidation in connection with extremism or terrorism they have carried out" with a fine or up to six years' imprisonment.

Article 405, Part 2 punishes "participation in the activity of a social or religious association or other organisation after a court decision banning their activity or their liquidation in connection with extremism or terrorism they have carried out" with a fine or up to two years' imprisonment.

The men are said to have come into contact with the Tabligh Jamaat movement in the early 2000s and to have travelled for religious education to its centres in India and Pakistan.

The men were accused of creating a religious group, reading religious literature and spreading the "ideology" of the movement by sharing their faith with other local Muslims.

An officer of Aktobe Regional KNB secret police – who would not give his name – said that he was unable to give any information as to why the KNB had decided to arrest the men and what they might have done to harm others. "Send us an official letter to our postal address with your questions and we will answer," he told Forum 18 on 26 July.

The KNB secret police then handed the case to Aktobe Regional Prosecutor's Office, where it was assigned to Zein Zhangaliyev, who prepared the case for court. He insisted to Forum 18 on 26 July that the men deserved to be punished for leading and participating in a "banned religious organisation". But he refused to explain what harm – if any – the men had done anyone.

Prosecutors handed the case against the seven men on 26 June to Aktobe City Court No. 2, according to court records. There it was assigned to Judge Erlan Bakytzhan.

The trial on 9 July was open, with five lawyers for the men and relatives present. All seven men pleaded guilty and "repented of their actions", the spokesperson for Aktobe Regional Court Anar Aitzhanova told Forum 18 on 26 July.

Judge Bakytzhan convicted all seven, but – in view of their "repentance", the fact that none had been sentenced before and that they all had underage children – did not impose jail sentences. Dosalin and Kishkentekov were released from detention in the court after the verdict was read out, Aitzhanova told Forum 18.

The Judge specified that all seven men are under probation, as specified by Article 44 of the Criminal Code, Aitzhanova added. They cannot change their job or place of residence without permission. They are also banned from visiting public places, such as cafes, restaurants and casinos. The men were not ordered to pay any court fees.

The men did not appeal against their sentences, which came into force on 25 July.

Compensation for abuse "too low"

Kharlamov – who lives in the regional town of Ridder - lodged the suit against the Police and the Finance Ministry seeking recompense for the long-running first criminal case against him and the abuse he had suffered during pre-trial detention.

Prosecutors had opened the case against Kharlamov in September 2012. They claimed to have found insults to members of various faiths in his writings, claims he denied. As part of that case he spent from March to September 2013 in pre-trial detention, including a month in a psychiatric hospital (see F18News 17 February 2017 http://www.forum18.org/archive.php?article_id=2258).

"The worst of the treatment was the six months they held me in pre-trial detention, including the month they forcibly held me in psychiatric hospital, trying to prove that I was psychiatrically ill," Kharlamov told Forum 18 from Ridder on 26 July 2018. "And for five more years I was still a suspect, and they kept me under surveillance, recording all my phone calls, even with my wife."

While pleased that the court has vindicated him, Kharlamov says the compensation is "too low for the abuse I suffered". As soon as the court issues the decision in writing, he said he would prepare an appeal to East Kazakhstan Regional Court to have the compensation increased. He vowed he would use the money to promote civil society and anti-corruption measures locally.

Kharlamov lodged the civil suit after receiving official notification in early May that the criminal case against him opened nearly six years earlier had been closed.

Ridder Police Investigator Erzhan Tokzhigitov closed the case on 27 April "for absence of a crime". Ridder town prosecutor Sait Aimukhan signed his agreement on 2 May. Kharlamov received the notification by post on 5 May, he told Radio Free Europe's Kazakh Service the same day.

This removed the restrictions Kharlamov – who is now 68 - had been living under since September 2013, when he was freed from forcible detention in a psychiatric hospital.

Kharlamov also told Forum 18 that he plans to lodge a similar civil suit over the second criminal case. (END)

Reports on freedom of thought, conscience and belief in Kazakhstan can be found at http://www.forum18.org/Archive.php?query=&religion=all&country=29.

For a personal commentary from 2005 on how attacking religious freedom damages national security in Kazakhstan, see F18News http://www.forum18.org/Archive.php?article_id=564.