Shia Imam Sardar Babayev, arrested in the southern Masalli District on 22 February, faces up to five years' imprisonment if convicted. He is accused of leading worship after having gained his theological education outside Azerbaijan. This criminal punishment applies only to Muslims, not to members of other faiths. It remains unknown when Imam Babayev will face trial. 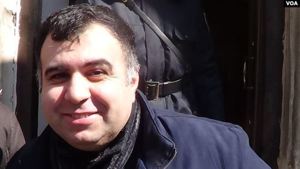 Javad Javadov
Voice of America
This is believed to be the first time any Muslim who gained religious education outside Azerbaijan has been prosecuted under Criminal Code punishments introduced in December 2015 (see below).

Imam Babayev's lawyer Javad Javadov complains about the use of Criminal Code Article 168-1, under which Imam Babayev is being prosecuted. "The Article contradicts both the European Convention on Human Rights and the Universal Declaration of Human Rights," Javadov told Forum 18 from the capital Baku on 11 March.

The 43-year-old Imam Babayev, who is married with three children, is in pre-trial detention in Kurdakhani Investigation Prison in Sabunchu District in north-eastern Baku.

"Why does he have to be in pre-trial detention?" his lawyer Javadov asked. "His arrest is illegal and directly linked to his activity [leading prayers]. What social danger does he represent?" His challenge to the detention is due to be heard on 16 March (see below).

No official, including Police Inspector Sahil Aliyev who is leading the prosecution case, was prepared to explain why Imam Babayev was arrested for leading public worship (see below).

Following Imam Babayev's arrest, local people demonstrated on the streets of Masalli. Police arrested about 15 of them. Four were sentenced to 15 days' imprisonment (see below).

Meanwhile, the imprisoned leader of the Islamic Party was sent to the punishment cell for five days in early March for praying the namaz (Islamic prayers) (see below).

Two Sunni Muslim prisoners of conscience were transferred from prison to night-time detention in September 2016 (see below).

Imam Babayev is being investigated under Criminal Code Article 168-1.3.1, according to case documents seen by Forum 18.

The amendments were adopted within ten days of an armed assault on the village of Nardaran near Baku, known as a stronghold of Shia Islam. The authorities arrested the leader of the Muslim Unity Movement Taleh Bagirov and many of its adherents (see F18News 1 December 2015 http://www.forum18.org/archive.php?article_id=2127). The authorities subsequently closed mosques in the village and handed down long prison terms on Bagirov and many other group members and associates (see F18News 9 February 2017 http://www.forum18.org/archive.php?article_id=2254).

Many leaders of the state-backed Muslim Board gained religious education outside Azerbaijan. The head of the Muslim Board Allahshukur Pashazade was educated at the madrassah in the Uzbek city of Bukhara during the Soviet period.

The lawyer Javadov told Forum 18 some 500 Muslim leaders gained religious education abroad, mostly through the Muslim Board or the Education Ministry. Like Imam Babayev, they too are at risk of prosecution if they lead worship.

Sardar Akif oglu Babayev (born 12 March 1974) completed theological studies at Al Mustafa University in the Iranian city of Qom in 2000. He also studied Islam in Baku. At the invitation of the state-backed Muslim Board, Imam Babayev has led the namaz (Friday prayers) at Masalli's Juma (Friday) Mosque since 2009.

Masalli District administration ordered the "repair" of the 120-year-old mosque. However, long drawn-out building work removed the roof and everything else except the walls, according to photos seen by Forum 18. "The community continued to pray the namaz in a small building in the yard of the mosque," Javadov told Forum 18.

In late 2016, the head of Masalli District administration, Rafil Huseynov, wrote a complaint about Imam Babayev, the lawyer Javadov noted. Police then investigated. Senior Lieutenant Sahil Aliyev then launched a criminal case against the Imam under Criminal Code Article 168-1.3.1.

Police summoned Imam Babayev on 22 February. He was immediately taken to Masalli District Court. Judge Nemat Musayev acceded to the request to place Imam Babayev in pre-trial detention for one month and seven days, according to the decision seen by Forum 18.

The lawyer Javadov was unable to attend the detention hearing because of the short notice and the distance he would need to travel from Baku to Masalli. "I phoned the court and asked it to postpone the hearing until 23 February," he told Caucasian Knot news website on 23 February. He complained that the court ignored his request and went ahead anyway.

Javadov has appealed on Imam Babayev's behalf against the pre-trial detention order, he told Forum 18. The suit is due to be heard under Judge Amil Dosiyev at Shirvan Appeal Court on 16 March.

No official was prepared to discuss why Imam Babayev is being prosecuted. The assistant to the head of the district administration Huseynov told Forum 18 on 13 March that Huseynov was busy and asked to call back. When Forum 18 called back the assistant instead referred Forum 18 to Nasir Mukhtarli, the deputy head responsible for social affairs. However, when called back the assistant asked Forum 18 to send questions in writing. When Forum 18 called Mukhtarli's phone the man who answered said he was not Mukhtarli and did not know his number.

Forum 18 reached the Police Investigator Aliyev on 13 March. However, as soon as Forum 18 asked why Imam Babayev had been arrested and was being prosecuted for leading prayers he immediately put the phone down. Subsequent calls went unanswered. Forum 18 asked Senior Lieutenant Aliyev in writing why Imam Babayev was being prosecuted. It had received no response by the evening of 13 March in Masalli.

The man who on 13 March answered the phone of Miryahya Badirov, the Masalli representative of the State Committee for Work with Religious Organisations, told Forum 18 it was a wrong number. Subsequent calls went unanswered.

Masalli Police detained about 15 of the local people who demonstrated in the town against the arrest of Imam Babayev, Javadov told Forum 18. On 24 February, Masalli District Court sentenced four of the detained demonstrators to 15-day prison terms under Administrative Code Article 535.1.

Article 535.1 punishes "Disobeying a police officer" with a maximum punishment of one month's imprisonment.

Imam Babayev was initially held in Masalli's Police Detention Centre. There he was denied access to the Koran and to a prayer mat, Javadov told Forum 18.

Officials then transferred Imam Babayev to the Justice Ministry Investigation Prison in Kurdakhani. "Imam Babayev has not complained about the conditions since his transfer to Kurdakhani," Javadov noted. "He hasn't been beaten."

Many prisoners of conscience arrested for exercising the right to freedom of religion or belief have been held in pre-trial detention in Kurdakhani in recent years. These include: two female Jehovah's Witnesses who offered religious literature to others in Baku, Irina Zakharchenko and Valida Jabrayilova; five Sunni Muslims imprisoned for attending a home religious meeting in Baku, Ismayil Mammadov, Zakariyya Mammadov, Shahin Hasanov, Eldeniz Hajiyev and Revan Sabzaliyev (see below); and Shia Muslim cleric Nuhbala Rahimov who led a mosque in the village of Nardaran near Baku (see F18News 27 January 2016 http://www.forum18.org/archive.php?article_id=2143).

The Investigation Prison address is:

Punishment for praying in prison

The head of the Islamic Party, Movsum Samadov, was punished for praying the namaz in prison. He was placed in the prison punishment cell on 6 March for five days. The punishment was handed down for "creating unsanitary conditions and praying the namaz in the prisoners' barracks", the head of Labour Camp No. 12 told Samadov's lawyer Yalchin Imanov.

When the lawyer visited Samadov in prison on 9 March, the prisoner insisted he had not violated the prison rules, contact.az news agency noted the same day.

This is the third time Samadov was sent to the punishment cell in the past four months, the news agency added.

Samadov was arrested with other Islamic Party leaders in January 2011. He was accused of a range of serious charges, including terrorism, attempting seizure of power and illegal possession of weapons. He was sentenced in October 2011 to 12 years' imprisonment. Samadov was held for the first two years of his sentence at Qobustan Prison, along the coast to the south-west of Baku. He was then transferred to Labour Camp No. 12 in the village of Puta in Baku's Qaradag District.

Samadov was arrested five days after a speech was placed on the internet where he harshly criticised the regime of President Ilham Aliyev. In particular he condemned the enforced closure of mosques, attempts to ban the call to prayer from mosques and punishments on women for wearing the hijab, a headscarf worn by some Muslim women.

From his prison, Samadov criticised the February 2017 arrest of Imam Babayev in Masalli, contact.az noted.

Prisoners have earlier complained about being refused access to religious literature of their choice and for being punished for praying in prison (see Forum 18's Azerbaijan religious freedom survey http://www.forum18.org/archive.php?article_id=2081).

Transferred from prison to night-time detention

The two remaining prisoners of the five Sunni Muslim men sentenced for taking part in an April 2014 home religious study meeting in Baku have been transferred to a lesser form of detention, Muslims told Forum 18 from Baku.

Armed police raided the meeting and arrested many participants. The five subsequently received prison terms of between 1 year, 7 months and 5 years, 5 months. In April 2016 these were reduced on appeal (see F18News 27 April 2016 http://www.forum18.org/archive.php?article_id=2173).

Eldeniz Hajiyev and Ismayil Mammadov were transferred in early September 2016 from prison to a Baku detention centre in what is known in Russian as "komendatura". They are free to leave the detention centre in the daytime, provided they remain in the city, but must return to the centre at night. (END)